We implemented custom software running as a background service on participants’ laptops. Every 10 minutes the software automatically asked participants to look at a random sequence of 20 on-screen positions (a recording session), visualized as a grey circle shrinking in size and with a white dot in the middle. Participants were asked to fixate on these dots and confirm each by pressing the spacebar once the circle was about to disappear. This was to ensure participants concentrated on the task and fixated exactly at the intended on-screen positions. No other instructions were given to them, in particular no constraints as to how and where to use their laptops.

We collected a total of 213,659 images from 15 participants. The number of images collected by each participant varied from 34,745 to 1,498.
The following figure shows the the collected samples across different factors, including: percentage of images having different mean grey-scale intensities within the face region (top left), having horizontally different mean grey-scale intensities from the left to right half of the face region (to right), collected at different times over the day (bottom left), and collected by each participants. Some figures with representative samples at the top. 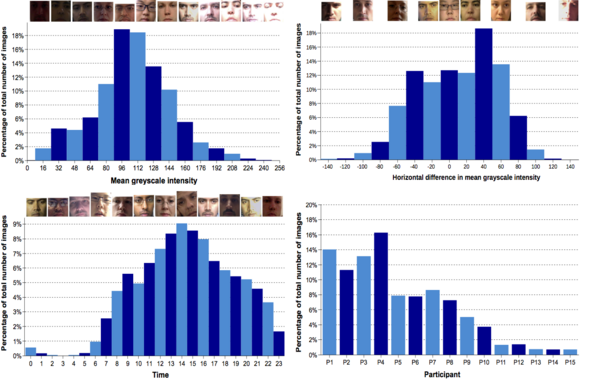 The dataset contains three parts: "Data", "Evaluation Subset" and "Annotation subset".
The "Data" folder includes "Original" and "Normalized" for all the 15 participants. You can also find the 6 points-based face model we used in this dataset.
The "Original" folders are the cropped eye rectangle images with the detection results based on face detector and facial landmark detector. For each participants, the images and annotations are organized by days. For each day's folder, there are the image collected by that participants and corresponding "annotation.txt" files. The annotations includes:

Besides, there is also "Calibration" folder for each participants, which contains:

The "Normalized" folders are the eye patch images after the normalization that canceling scaling and rotation via perspective transformation in Sugano et al. Similar to the "Original" folders, all the data are organized by each days for each participants, and the file format is ".mat". The annotation includes: